Spitting in public places is gross, a health hazard, and one of the most common reasons for an unclean India.

The habit is among the greatest levellers found in people who chew paan, tobacco or even gutkha. They expectorate on the roads, on landings and inside lifts, unmindful of the diseases their sputum could spread.

Doctors say that the phlegm, especially of a disease–carrier, can spread air–borne respiratory diseases like tuberculosis (TB), pneumonia and influenza and even lead to a TB epidemic, if unchecked.

“The habit can cause havoc,” said chest physician Tushar Sahastrabuddhe, professor and head of the department of tuberculosis and respiratory diseases at Dr D Y Patil Medical College.

This habit should be cured as soon as possible to maintain the hygiene of the country.

This could be done by following ways:

• School children should be taught of harmful effects of spitting in public places.

• Heavy fines for those who spit in public

• Mohalla committees should campaign against it

• NGOs should step up awareness through street plays and hoardings in economically weak sections of society.

Sanitary And Hygiene Starts With You And Me. 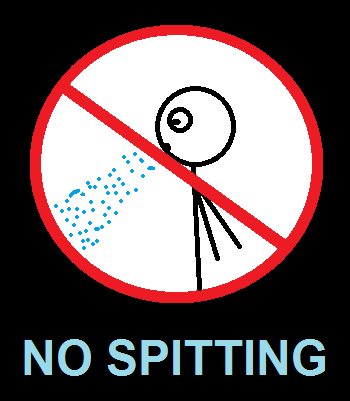